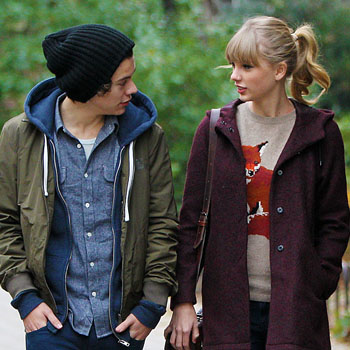 Taylor Swift and Harry Styles' budding relationship has some in a tizzy.

Just a couple of weeks ago, I wrote about a hot new celebrity couple: Taylor Swift and Harry Styles. At the time, the whole thing was basically a rumor, but now these two are out and about, flaunting their new relationship and freaking out fans all over the globe.

Let me address the Swifty fans and the Directioners (fans of Styles' band, One Direction): Chill out. Seriously, calm the heck down, would you? This is not the end of the world, I promise. I felt the same way back in the day when...oh, never mind. No sense in reminding you that I'm old, because you surely wouldn't listen to me then.

Listen to me, okay? Taylor Swift and Harry Styles, like it or not, are totally into each other at the moment. Pay attention to the last part of that sentence (at the moment). This budding new young coupling may or may not last, but it won't be because of what the fans think. Some people are taking this a little too far, you know?

Example: One Direction fan Ashley Frangiapane is super concerned that Taylor Swift is going to smush Harry Styles' fragile heart. She's so worried that she's written a parody song about the couple, calling it "The Haylor Song." Yes, it's a parody of Taylor Swift's song "I Knew You Were Trouble," and to be honest, it's actually pretty good. It's also hilarious.

That, kids, is how you put your frustration and fear to good use.

Not everyone is handling this so well. One report says Taylor Swift has actually received death threats from Harry Styles fans (making him "livid"). That's just ridiculous, and pretty sad. Styles' friend is quoted as saying that Harry "just wants to date who he wants without fans going into overdrive every time he’s linked to someone." Hate to tell you this mate, but given your heart throb status, your fans are going to go nuts no matter who you date. Just ask Justin Bieber (and Selena Gomez, for that matter) if you don't believe me.

Any Directioners care to comment on all of this? Are you devastated that Harry's got a new girlfriend in Taylor Swift? Are you worried she'll break his heart? Would you ever go so far as to threaten anyone over your crush?


What happens when a celebrity slams their own show?