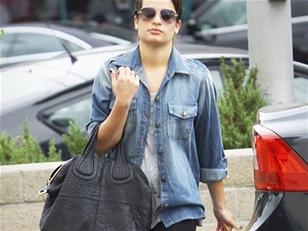 Is Lea Michele pregnant?! Rumors were rampant early this week that the Glee star might indeed be expecting, after photos of her sporting a possible baby bump surfaced. Here's the thing about baby bumps (and personally, I loathe the term, but it's just the easiest way to explain): Ever feel bloated after scarfing down lunch too quickly? If you're already super thin, your tummy might pooch out just a bit.

If you're a high profile Hollywood actress and you've got even the slightest hint of a pooch, oh boy, you're supposedly preggers!So, back to the original question: Is Lea Michele expecting a baby with boyfriend (and Glee co-star) Cory Monteith? No, she's not. In fact, the denial came straight from Lea herself, via Twitter, telling her well over two million followers, "My first fake pregnancy rumor! I've finally made it!"

Instead of getting angry about the crazy pregnancy rumors, Lea Michele actually embraced the idea of the fake story. Honestly though, she "made it" years ago. Still, she's missing out, at least for now, on some awesome baby gift from idol Barbra Streisand!

I for one am glad every single day that I'm not famous. I'd be horrified if everyone judged my appearance like the media does every single second of the day. We all have our not-so-awesome days, and if I felt a little bloated and covered up with my enormous purse to hide it, I wouldn't want to be splashed all over magazine covers. UGH.

Lea Michele and Cory Monteith do make an adorable couple, and maybe someday they'll decide they want to have some little ones. For now, that's not in the cards.


Who is Tim Tebow's new girlfriend?


Jef Holm and Emily Maynard really are over