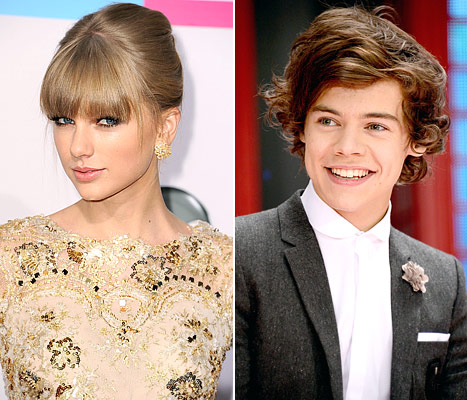 You've got to hand it to Taylor Swift: The girl knows how to grab headlines, especially where her rumored romances are concerned. This latest one is a real doozy, too, and it's sure to set the pop culture world on fire. Supposedly, Taylor may or may not be totally into One Direction singer Harry Styles.

Directioners, calm down: Harry and Taylor have not confirmed anything. At the moment, this is all mere speculation. Swifty fans, you calm down too. Your girl will be just fine, no matter what.

But really, are Taylor Swift and Harry Styles hooking up?! Reports have hinted that these two are dating, but Swift (and Styles for that matter) are frequently romantically linked to people for no reason. What's the deal here?

One witness (unidentified, of course) tells Us Weekly that Taylor and Harry engaged in some serious flirtation during a rehearsal for The X Factor last week. Supposedly they "lit up when they saw each other." That in itself might be nothing. These two could just be close friends, after all. But wait! There's more! This same source also says Taylor Swift and Harry Styles held hands on the set and then...wait for it...Harry Styles "carried her to the trailer."

So, there's that. If Taylor Swift and Harry Styles are indeed a couple, they'll be the hottest duo on the planet (sorry, Kim K. and Kanye). Fans, what do you think? Is this a match made in heaven or another hit and miss?


What happens when a celebrity slams their own show?


One Direction movie is happening